The cultural capital of the city houses many Hindu religious places. The place is also a religious tourist spot. The temples of Rajahmundry are visited every year by hundreds of tourists. All the festivals are celebrated in these temple with religious fervour. 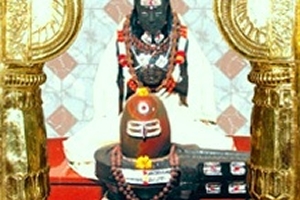 The famous lord Shiva temple Markandeya Temple is located in the town of Rajahmundry. The temple was a mosque in ancient times later it was declared as Shiva temple after the archaeological surveys done by Indian Archeological survey. It was reconstructed in 1818 by Gundu Sobhanadriswara Rao. The reconstruction of temple was done with addition of a gate at Gunduvari Street.

Sobhanadriswara Rao resided on this street. The story narrated behind the temple was Muni Mrukhanada prayed to Lord Shiva for a child here and Lord Shiva appeared and granted her the wish with an option of choosing between a child with life of 11years and husband. Muni Mrukhanada chose the child who lived happily praying to lord Shiva for 11years. Later the death god came to take his life but was granted long life by lord Shiva. 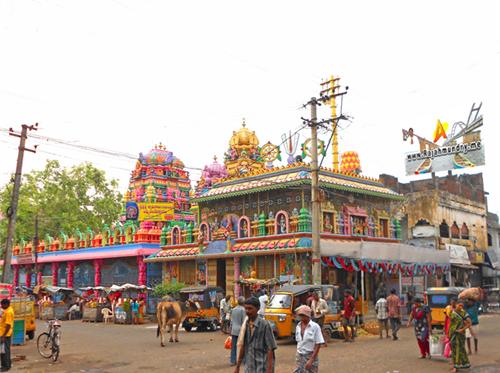 The Temple is situated in the heart of the town, which is very near to R. T. C complex and S. C. Railway station and on the main line of Chennai to Howrah.

The 100 year old temple is a part of Rajahmundry town. It is an ancient temple where the Sri Syamalambavaru is worshiped as the Goddess of the Rajahmundry city. At this present place Sri Syamalamba Ammavari murthi was installed in the place of Somalamma Ammavaru. 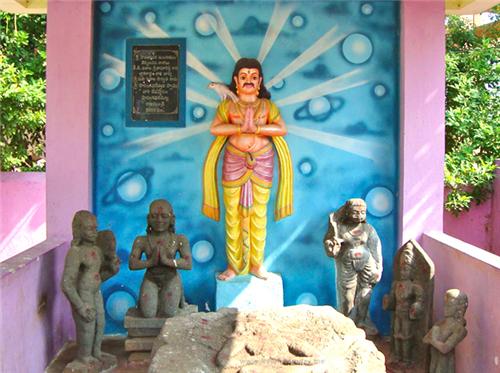 The history behind the temple as narrated by localities relates to the son of the Raja Raja Narendra ruled Vengi country with capital as Rajamahedri. The son of the king was Sarangadharudu and his second wife was Chitrangi. The enemy of the King was his step mother's son by name Vijayadityudu.

The step son of Chitrangi was invited on feast by her. Sarangadhara ignored the invitation and went for hunting. The enemy took the benefit of the situation and spread the rumor about queen and her step son affair. The king without knowing the truth punished the son.  The hands and legs of the son were cut as punishment ordered by king at the Northern side of the village near the hill. The cry in pain of Sarangadhara was heard by Sivabhakta also known as Meghanadha. He advised Sarangadhara to pray Lord Shiva. Lord Shiva got impressed with his prayers and blessed him with beauty and his hands and legs. 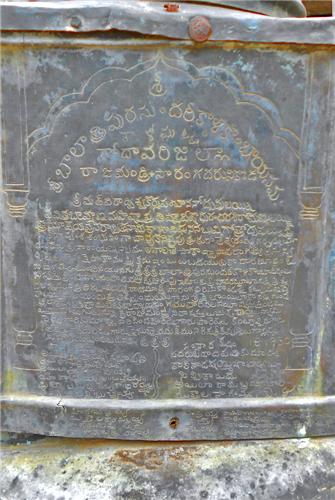 Sri Kalleswari Sahitha Sri Balathripurasundari, Kalikamba is a Bhadhrakali Temple. It is Mahakalli's temple in Rajahmundry. It was built in the year 1926.  The temple was created by placing statue's of god's which are from different places like, they got the Spatika lingam from Kassi, Bhadrakali from Varangal and other statue's from Chennai.

The single stone with many beautiful cravings with a statue of Mahakali, pillar's,etc. Sivapanchayanam is located at Nandheeswara with a dhvajasthambha on which the pictures of Bhadrakali, Bhagalamuki and Kalikamba are made.

Sri Sida Anjaneya Swamy Temple is a temple dedicated to Lord Hanuman. The temple was reconstructed in the year 1865 by Allam sathiya garu. The temple is located in the the Lakashmivarapu peta, Rajahmundry. Special pooja's is performed on every Tuesday. 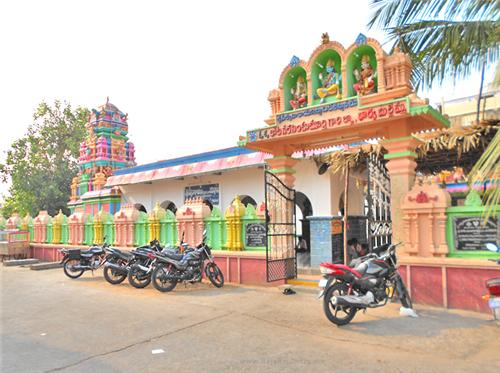 Sri Satyanarayana Swamy varu situated at Aryapuram, Rajahmundry is 130years old temple. About 1000 marriages are performed everyday in this temple. The temple is situated adjacent to the Godhavari River. Numerous tourists visit this temple at the time of Pushkarmas and perform the religious activity of taking a dip in the river to get rid of their sins of their current and past life.

The temple is 200 year old with Lord Sri Visweswara Swamy Vari's idol placed in Visweswara temple.
The place is popularly known as Dakshina Kasi, Rajahmundry. The 'Ganti Vamsa' one of the Siva devotee had a dream about the construction of Siva temple on holy river Godavari, in Rajahmundry.

The other idols placed in the temple are of "Puthra Ganapathi and with Sri Chakra", Rama Sahitha Satyanarayana, Lord Venkateswara with Padmavathi, Alivelumanga, etc.

The temple is also popular as "Jodu Gulla" as the idols of Lord Siva and Lord Vishnu are placed together. Anjanaye temple, Sri Valli Devasena Sametha, Sri Subrahmanya Swamy Temple was also constructed.

The temple was over taken by the government in 1979. 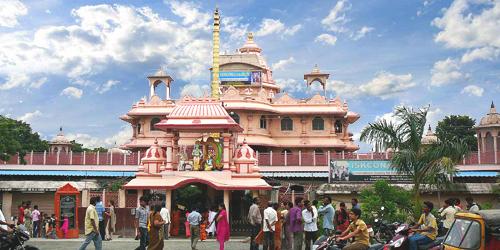 The ISKCON Rajahmundry temple covers an area of two acres situated on the bank of river Godavari. The story behind the temple is that the Saint Sri Chaitanya Maha Prabhu met Saint Sri Ramananad Raya at this place. The place is known as Ramananda Raya Gaudiaya Math. The ten mantaps of lord's ten incarnations (Dasavatras) is around the temple. The temple is the third largest ISKCON temple in India. Thousands of devotees visit this temple everyday.

Jagannadha Swamy's Temple in Rajahmundry is located in Devi Chowk area behind Sri Uma Basavalingeswara Swamy Temple. The temple was constructed in ancient time by ruling dynasties. The temple used to be opened for public on Ekadasa (Tholli Ekadasi) Festival day in ancient times.
The temple in India is the second Jaganatha Swamy's temple after the one located in Puri.

The temple was constructed under the supervision of Saint Keshav Das Maharaj. Lord Panduranga blessed him and the temple was constructed in 1974. The idols of Sri Rukmini and Panduranga were placed initially and the temple got completed in 1975 on Vijaya Dashami.
The other idols placed in the campus of the same temple are Sri Viranjaneya, Parvathi-Omkareswar, Sri varasiddhi Vinayak, Navagrahas, Sri Tulasi plant, Nagendra, Hanuman, etc.

Sri Sanjeevini Anjaneya Swamy temple was established in the year 1850. The temple was reconstructed in 2001. Local people believe that by doing 40 pradhakshina's around swamy will result in making their wish come true.
Phone: +91-9849639500

Explore more about About Rajahmundry